On a hill in Eriksberg, with a panoramic view of Gothenburg, there stands a 25 storey building. The building has become known as the Kronjuvelen (Crown Jewel) because the angled lines of its unique architecture resemble a diamond. Over the last year, Kimmos Måleri has painted all of the building’s 176 apartments.

Since late summer 2021, Kimmos Måleri painters have been on site at Kronjuvelen, next to the Göta River. The high-rise is by far the tallest building in the Eriksberg district and will offer spectacular views to future apartment residents. The industrial character of the building is inspired by the former shipyard buildings which form part of the view. Its appearance also pays homage to the silo that used to stand on the site of Kronjuvelen.

Kimmos Måleri is familiar with managing large projects and paints around 400 apartments every year. It is the building itself that makes this project unique.

"We've never worked in a high-rise building with this many storeys before, so it's a new experience for us. "In order to get a good flow of work, we have worked on two floors at a time, to be able to alternate between drying times," says Michael Assmundsson, project manager at Kimmos Måleri for Kronjuvelen.

Residents can look forward to a restaurant, communal roof terrace and relaxation area on the top floor of the building. The upper residential floors house fewer, but larger apartments with panoramic windows. Completion is expected in the autumn/winter and Kimmos Måleri is now finishing its work on Kronjuvelen. 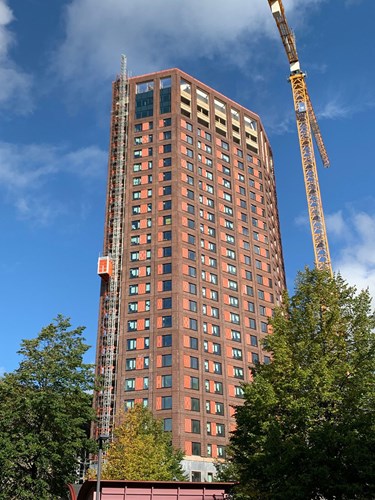